It was late when Zoe returned home, so late, in fact, that the sun had long ago set and she had had to rely on the headlights of the car to navigate her way along the roads to her home. Main Street was well-lit with old-fashioned looking street lights resembling gas lamps, but the rest of the town had only a street light here and there, mostly on the corners so that the stop signs were illuminated. It wasn’t raining, so she didn’t have that to contend with, nor the shadows that made her fearful, wondering if she was safe anywhere in town at all.

The car had gone silent somewhere outside Lenoir when she ran out of radio signal. She was breathing too hard when the oppressiveness of the town reached her. It was like being roped back into a cell jammed full of people all pressing against each other.

Once home, Zoe waited, her car pulled forward in the double drive behind the empty side of the garage where her momma’s car no longer sat because she no longer had a momma. It must have been hard on her dad to go out there each day and see the empty space, waiting for a car that would never again pull in. Zoe didn’t have a garage door opener so her car had to stay in the driveway.

She hunched her shoulders, pulled open the door, and got out. She ran through the darkness to the glow of the porch light, keys out and ready to plug into the lock on the door. Someone was barbecuing, the smell too far away for it to be her dad. Besides, he didn’t like to eat that late. It was after eight. Not everyone shared his sensibilities.

A car rolled by on a cross street, the purr reaching her ears over the pounding of her heart as she fiddled with the lock. Her dad, clearly listening for her, opened the door before she figured it out, an act she had performed a hundred thousand times when she was a teenager, coming home to an empty house or coming home to a sleeping one, yet she couldn’t find the lock.

“I was getting worried,” Ed said, standing back for her to come in. He was dressed in loose-fitting jeans and a short sleeved, button-down shirt. Zoe wondered when his clothing had gotten so loose, as if he was a man diminished since her momma was gone. It shocked her each time he walked into a room now, seeing him getting smaller and older.

“I called before I left the mall,” Zoe said. Not that she was going to be angry with him. She was worried about herself, too.

“I know, but there’s a lot of dark road out there.” Ed looked out the front door as if he’d see whatever it was that was after Zoe. It took her a minute to realize he didn’t know about the supernatural element of this murder, that he would probably laugh if she told him she was afraid of a garden gnome.

Zoe smiled and set her purse on the table near the door. She pulled out her phone, carrying it with her. “I was fine, Daddy. Really. I just saw a shadow yesterday in the backyard. It’s not like someone is following me.”

“You read about that though,” Ed said, walking into the family room where the television sat. “Serial killers stalking their victims for months before they act. If he was here, how do we know he hasn’t decided you’ll be next and he’s just looking for a chance? I should have gone with you to Hickory. We could have eaten out there together.”

Zoe prevented herself from groaning. Just what she would have needed was her dad hanging out with her, smothering her even when she was out of town. She wasn’t certain she was safer down the mountain, but she’d felt a little safer as if the reach of the creature didn’t quite make it all the way to Hickory.

“Kay Rees called,” Zoe said. “She’s coming back to town. I want to talk to her because for some reason I was thinking about her when I talked to Chief Rees about Momma.”

“Don’t know why,” Ed said. “Not like she and your momma were friendly. Not even like your momma was friendly with her momma neither.”

“Just something that was bothering me. Maybe Kay said something to me at the diner when I was there,” Zoe hedged.

“That Dixie Fulton was always a piece of work. Course you can’t say anyone raised up in one of the hill shacks is going to be that sane. Probably mold and crap in there.”

Zoe paused in the doorway looking back at her father as he mused about Dixie Fulton Pugh.

“She liked to say she saw into the other world. Then, when she lost that baby she got all religious, practically lived at the Bible church for I don’t know how long. Then she got pregnant with Kay and was back to being a little more normal, but always was a little too fire and brimstone for me after that.” Ed shook his head.

Zoe nodded, wondering what had caused Dixie to make such a huge change in her life. It seemed to be about the miscarriage, but women lost babies and they didn’t all suddenly become obsessed with their faith. Maybe her father was exaggerating.

“What did she mean by the other world?” Zoe asked.

Ed shrugged. “She wasn’t really in my class, you know?” Her dad’s family didn’t always associate with those up the mountain, in the shacks, as he called them. They were very class oriented, always trying to make sure they stayed on the right side of whatever line they had set for themselves in town.

“Still, you knew about that,” Zoe pressed.

Ed sighed as he sank down into the chair in the corner. Taran had filled the chair better than her dad did, although at one time the chair had seemed small for his frame. Her chest felt too small for the pain that she felt at that thought, constricting against it, pulling it deep into her heart as if trying to hide it from her being, but instead wounding herself further.

“Everyone did. In high school we all thought Lorne Pugh was a fool to be so smitten with her. Teased him about a spell she’d set, though she said she wasn’t a witch. Only reason we let him off was because Dixie was so clearly interested in someone else and he didn’t give her the time of day. Can’t remember who it was. Football player, I think. Left town, but never amounted to much.”

Zoe shifted her weight, hoping that wouldn’t distract her dad.

“She used to say she saw things out in the woods. Figured she was just playing with us. It was only when she started talking about how demons could rope anyone into a compact—that was the word she used, “compact”—and that you had to be careful, that we wondered exactly what she saw. When she got all religious, there was some talk that maybe she had made a bargain with a devil and it had backfired, but no one knew what she would have bargained for,” Ed said finally.

He shrugged. “I doubt that helps you much. But it’s one reason why your momma wouldn’t have been too friendly with her. Your momma and her family were always part of the Lutheran Church, and that whole deal with the devil was a little too religious for her. You know your momma, just one step up from an agnostic.” Ed chuckled at what had once been a joke around their house because Jodie had been so pragmatic about things. Church was always something of an afterthought, unlike most of the neighbors

Zoe laughed with him, just a little, before she turned to go down the hallway and take a shower. The bathroom was dark and smelled of her usual mix of semi-unscented products that always seemed to have the faintest trace of rain or gardenia no matter how she tried to find something completely without fragrance. Zoe glanced up at the window that was at the end of the room as her hand shifted to the light switch

There was a pair of lights out there that looked strangely like eyes looking in at her. Her finger leaped when she started and the lights blazed on. Zoe turned the lights off again quickly, hoping to catch whatever was out there, but it was gone.

The glass was frosted so that no one could see in. Even in the bathroom, the window was above Zoe’s eyes. She’d have had to stand on a stool to press her face against the glass. What had she seen? Zoe shivered as she tried to decide whether she still wanted to take a shower before bed.

Chapter 30 will be coming next Friday. Don’t want to wait? Find the book here.

Rescued From the Rain 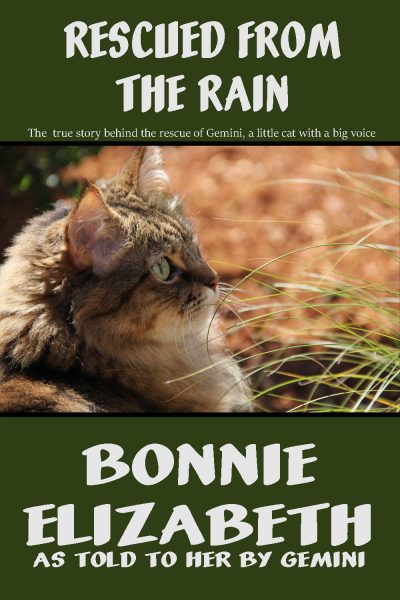