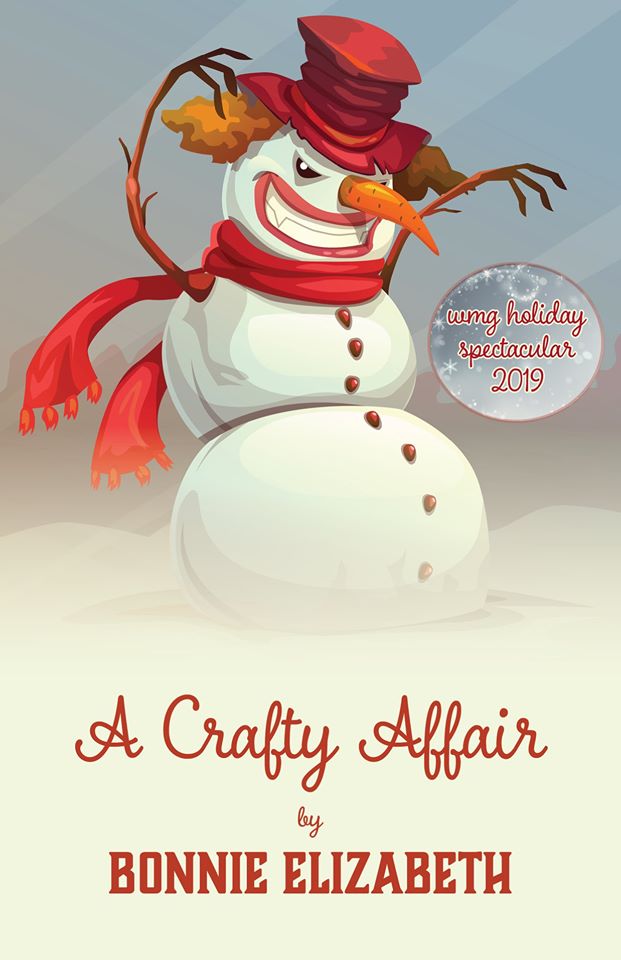 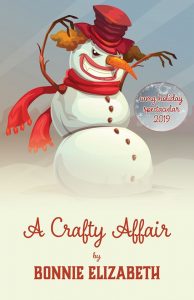 A Crafty Affair is published in the WMG Holiday Spectacular. You can still get in on all the great stories this year here. This idea is the baby of Kristine Kathryn Rusch who loves advent calendars and stories. She put the two together to bring you a story a day from Thanksgiving to New Years. It’s a great gift idea or a treat for someone who loves short stories. A Crafty Affair was the second story of this year’s Spectacular. 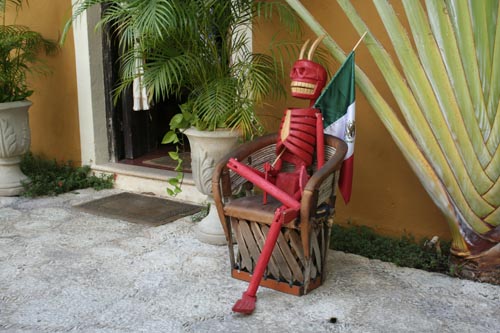 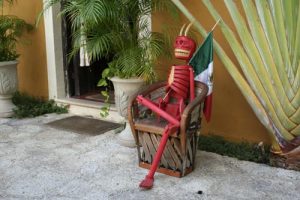 So I decided I would challenge myself from time to time to write a short flash fiction story, about 200 words, about a photo that I had taken somewhere. I’d include the photo and the short story. I’m not letting myself think good/bad/stupid/indifferent but just posting them. Who knows? Maybe there will be story ideas here. And I can explore certain ideas, practice certain types of techniques in this quick and dirty little exercise.

So here it goes:

In the sun, which beat down on my head the way the sweat poured off my body, I thought in no time I would look like the creature in the chair. Who was he? What was his story? How could I tell his when I didn’t know mine?

The colors of the skeleton put me in mind of the heat that beat down along with the chilies that had been in my food. Why was everything here so hot? Food, weather, sun.

A child tripped over the skeletal creature sitting there, outside the shop, like it was nothing. The wooden bones began to topple to the side, like a toy tower. The child screamed.

I settled into the chair, using the flag as an umbrella. Yet another visitor exhausted from the heat, waiting for his wife while she shopped, beneath a sweltering sun.

A different child trips over my feet, falling down, beginning to cry. I leaned over to offer comfort as the mother swept her up. I toppled to the side, like the creature before, scattering into a hundred pieces just as my wife walked out of the store, packages in hand.

Many authors are starting to add some free fiction. This is from a novel I’m working on now. I’ve no idea if it will end up working but it’s sure been fun. The city is Whynd and I have some short stories written in this city. I hope you enjoy

Some people are born lucky. Not Trace. Trace was born with the dark hand of fate over his head and most people had the good sense to avoid him. Not Fancy. She’d loved him from the moment he’d attempted to steal a farthing from her father while he paid the butcher. The butcher’s hand had shot out from his stall and grabbed Trace’s wrist, holding on tightly.

She’d giggled over the way he’d blushed and fumed when he’d been caught. She’d covered her mouth with a hand that was browned from the sun, indicating that while her dress was clean, she wasn’t rich. Even the brown of her hair had hung down along her back and not done in fancy braids like so many others.

Trace remembered what she hadn’t done too. She hadn’t been holding a white handkerchief over her nose to block the smell of blood and gore. She hadn’t been fidgeting, hurrying her father along. She’d merely stood there, stoic and waiting. They had a wagon waiting to carry the side of beef they were purchasing. Trace had never in his life knew anyone who purchased a side of beef.

But Fancy’s father knew something about preserving. And they had enough cold storage to last until the beef had all been preserved. Then they’d go about the market selling it and some meat pies that her mother made. Trace thought those were the best pies ever but it would be a very long time before he got to taste them.

The butcher had grabbed his arm and threatened to call the guard but at Fancy’s small sigh, reminding him that she was a young woman, and that she just might be forever traumatized by an arrest and foul language, he’d let Trace go.

That was the best luck Trace had had in his life. He’d courted Fancy as best he could for the next year and a half. He’d brought her things he’d filch from the market. She’d take them and shake her head, even if it was just a ribbon that no one would ever notice missing.

“I can’t take this Trace. If you want to court me, you need a real job.”

“And who’s going to hire the likes of me?” Trace had asked. He wasn’t trained in anything. He was reasonably strong but not disciplined enough for the guard. He didn’t know sword fighting and he certainly didn’t have the birthright to guard the king.

“Maybe you could be a sell sword?” Fancy suggested. “They do real well now. Lots of merchants traveling around since the Wraith War.”

Trace’s own father had been killed in that War. Not that Trace had lived with him then, exactly. It’d been a place with a roof and he could grab some food but his father had always been gone more than not. He’d signed up for the wars, thinking of the plunder and riches and perhaps the ability to find himself a wife, buy a wife if nothing else.

But it hadn’t gone that way. He’d died the day he’d arrived at the Desert, shot by arrow when he’d been getting settled. There were four other men died that same way, at least that’s what the officials who had come to tell him about his father said. Right before they told him he had to pay rent or move out.

Zari A wanted to stop outside Seattle.  She kept getting a hit from something east of the road. I followed the highway east only to find that she wanted to keep going.  Zari A knows about nature spirits and she was sure this one was awake.  She is an ever curious companion.  Normally she’s smart but sometimes I think her curiosity overrules that.

Still, the town we found, Whisper Washington is lovely.  In fact, the whole are is lovely.  I drove through a small place called Duvall, noticing the antique markets, signs for quilt shows and plenty of dog walkers.  I considered going for a short walk down one of the trails but the sun was high, the dogs were out and Zari is a cat so she can’t stay in the car.

Okay, I admit it.  I talk to my cat.  Except the bigger secret is that she’s not really a cat. She’s an alien in a cat’s body and that’s a long story. Believe me, I get to hear about it whenever she rises to complain.  However, cats create limits on what I can do, so I passed on stretching my legs and drove through the town.

Zari directed me farther south and then east again. We drove up past Lake Joy and into the foothills east of the Snoqualmie Valley.  Too many hills blocked the view, until the road started to climb again.  Then I was in a town.  It was larger than Duvall, but not so big as Redmond.  I passed through what looked like the new commercial area into an older area, quaint like Duvall had been.  Neither town had any artifice.  These really were old buildings, well kept and refurbished, but old all the same.  Once in the older town, Zari assured me that this is where we wanted to be.

That meant I got to look for a place to stay.  I have an updated GPS and while I didn’t hold out much hope for its assistance, I was in luck.  The Old Whisper Inn was listed just about a mile down the road.  I left behind the buildings, with more people out walking about along with their dogs to drive around a bend and into a forest only to come out on the other side to see a gorgeously quaint building ahead.  It looked off to the north when I pulled around.  There wasn’t a huge view, as low mountains blocked much of that, but the horizon was gorgeous and dotted with the trees not far from the vantage.  Below it was a small valley between the foothills.

Getting out of the car, I found myself smelling the air, something I didn’t do often.  I turned around to go in, when a man was suddenly walking over to me.  He wasn’t threatening at all.  His hair was the deep brown color of mud and his eyes the hazel green of autumn leaves.  He stood only a little taller than I, perhaps five foot eight.  I’m only five one but compared to most men, that’s not much taller!

“You’re new here?” he said.  I was thinking he was the inn keeper.  What a quaintly friendly town.

I set out this morning with Zari-A.  Again.  In the car.  I washed out the color of my hair so it’s more natural now.  I think the last time I had naturally colored hair was when I was fifteen or something like that.  It surprises me to look in the mirror and see it.

I’m heading north.  Zari is thinking Bellingham, WA.  We’ve been all over the US.  I doubt anyone would expect me to head just a few hundred miles north this time.  Or maybe it would be expected.  Zari is so good at hiding tracks, I’m not certain how I keep getting found.

If you must know, I hate the sense of being out of control. I was out of control for my entire childhood. I worked hard to get to a place where I was in control.  Part of the satisfaction of working with Zari A is the fact that she gives me more control.  I know I’m safe if I’m in control. If I’m not, then I’m not safe.  Of course, that’s what abuse is about, taking control and maintaining control over someone else.  I can’t believe I fell into that trap.

I’m doing what I can to get out of it, but he won’t stay behind. He keeps hunting. I don’t like being prey. 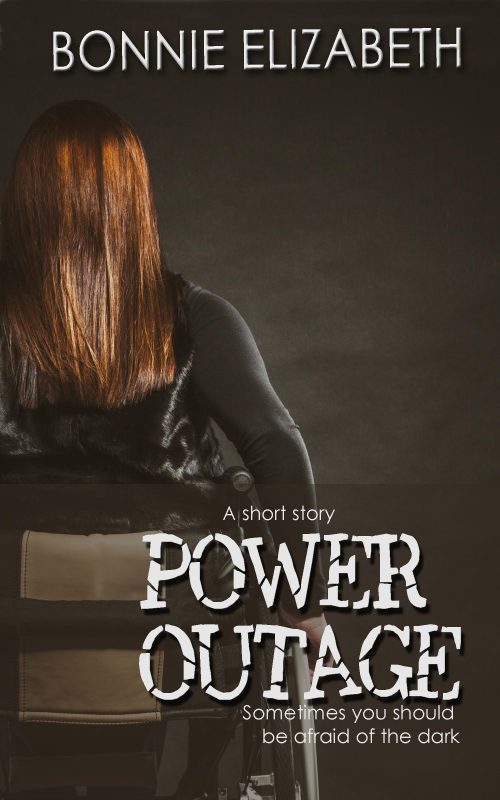 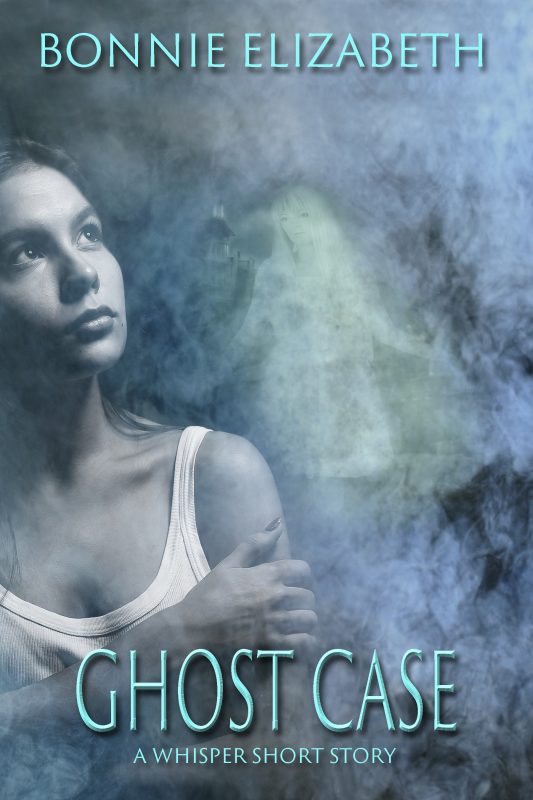 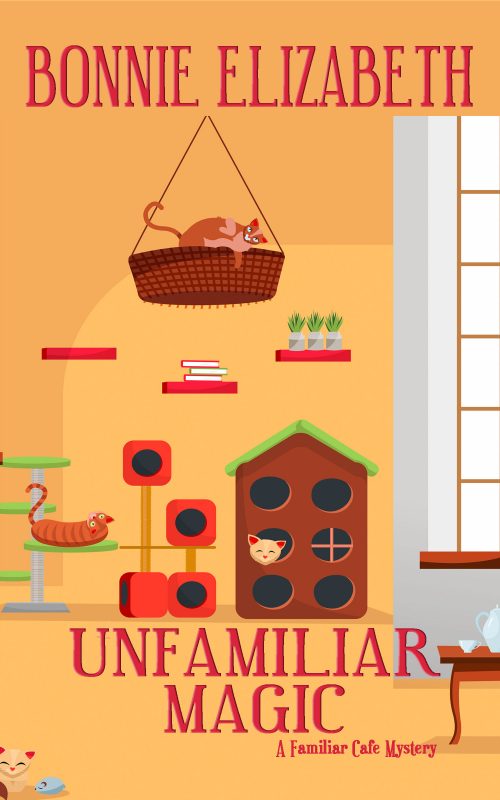 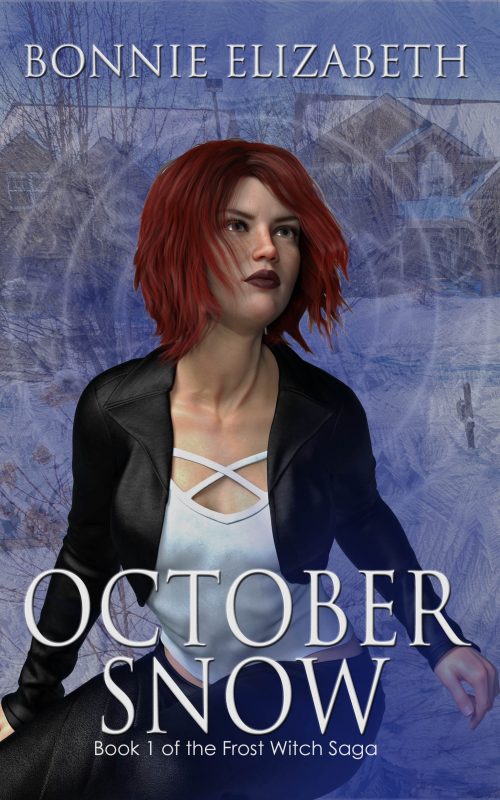